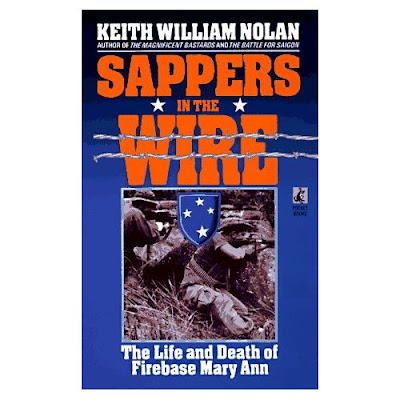 There are few times in life that you're given the key piece of another's life history, that put your relationship in context. In a way, it defines that person. It enslaves them, while you remain free. It haunts them, while you fear nothing. It steers them, while you ride. It becomes the missing link to a chain pulling one through life.

A few years ago, I began asking questions about war. In particular, the Vietnam War as told through the eyes of my own father. It wasn't something I had been privy to as a child. The intimate details were still fresh and not ready for telling. The ramifications of actions would have been lost to my ignorance if told before I was mature enough to appreciate its effect. I knew the basics. My dad was in a Vietnam Veteran. He served as the medic for his platoon. He trained in San Antonio, Texas. He was involved in a terrible battle at Firebase Mary Ann.

One day, my curiosity led me to search Google for more. To my surprise, I learned that an entire book had been written about Firebase Mary Ann and the terrible tale of what happened that one night. I bought the book on Amazon and unlocked the mystery of my father's tale.


The battle took place on a remote hilltop in Quang Tin Province during the latter days of "Vietnamization," when open defiance of orders was common among GIs. What happened at Firebase Mary Ann the night of March 27-28, 1971, was, according to the author of this riveting account, the U.S. Army's "most blatant and humiliating defeat in Vietnam." That night, 50 sappers of the 409th Viet Cong Main Force Battalion, wearing nothing but shorts, slipped through the base's barbed wire without alerting a single sentry, killed 30 GIs and wounded 82 others. Relying on interviews with survivors and recently declassified documents, Nolan reconstructs the assault from start to finish, showing how a demoralized American unit (1st Battalion, 46th Infantry, Americal Division) was crushed, despite the heroic actions of a few individuals. He traces the chain-of-command process by which the defeat ruined the careers of the division and battalion commanders. By the author of The Magnificent Bastards, this is a perceptive study of poor leadership and combat demoralization. It is also a terrific battle book.


A Night That Changed My Father's Life

Listen to an audio conversation with my father telling what happened that night. In the conversation, he explains the psychological effects of his experience, and gives advice to current troops in battle.

How The Story Changed The Son

As I learned the details of my father's experience at Firebase Mary Ann, all my previous terms of identification merged into a prism revealing the sharpness of light in the shadow of times past. The context of our relationship, the oft, emotional distance, the lack of mutual understanding all came together in the telling of the story. I understood my father like I had never understood him before.

Ron McCarthy was awarded the Bronze Star with a "V" for Valor along with various other medals.
Posted by Rodney McCarthy at 11:34 AM 1 comment: